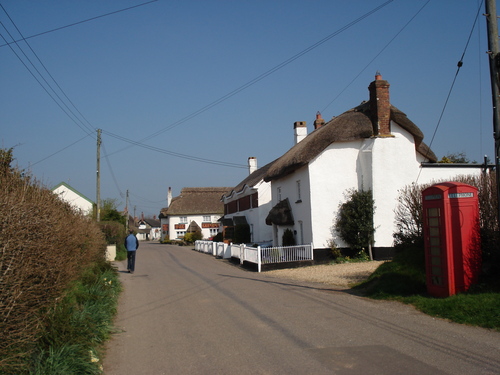 Chittlehamholt is a civil parish in North Devon district, Devon, England. In the 2011 census it was recorded as having a population of 169.[1]

The neighbouring parishes are Satterleigh and Warkleigh to the north, King's Nympton to the east, Chulmleigh to the south east, Burrington to the south, and High Bickington in Torridge district to the west.[2] The River Taw forms the southern and western boundary of the parish, and the A377 road from Barnstaple to Exeter skirts the parish on the far side of the river.

There are 26 listed buildings in the parish, all at Grade II. They include two bridges, the church of St John Baptist, a Gospel Hall, Chittlehamholt Manor, the Exeter Inn (a 16th-century coaching inn)[5] and houses and farm buildings.[6]

The parish church of St John the Baptist is part of the South Molton Mission Community within the Diocese of Exeter.[7][8]

The parish boundary follows the course of the River Mole in the east and the River Taw in the south and west. The northern boundary runs from Slew in the west, through Drake's Wood and the northern end of Chittlehamholt and down to the Mole valley in the west.

Some information provided by Wikipedia. Information in this article is provided under the Creative Commons Attribution-ShareAlike license.

Do You Know Any Local History?

Help the Council create a museum for the 3 Parishes.

The Council is pleased to announce that it has received a further grant of £1,100 from Devon County Council towards its programme of highway maintenance.

North Devon Council has set up a recycling facility for empty crisp packets. You can take your empty packets for recycling at a collection point in Lynton House, Barnstaple.

Removal of the Willow House on Launds Playing Field

The Council has determined that the Willow House on the Launds Playing Field is no longer an attractive feature and is therefore considering its removal.
Read more ...

Landowners - Do You Have Overhanging Trees?

Landowners are reminded to check that where trees on their land overhang the highways these are not causing any obstruction. The minimum clearance for trees overhanging the highway is 5.2m (17 feet). Devon County Council guidelines on hedge and tree maintenance can be found here.